Facebook has a GraphQL endpoint which can only be used by some of their own first-party applications. Generally, you need a user (or page) access_token to query the GraphQL endpoint. I have decided to try using Facebook for Android application's client token, but the endpoint returned an error message:

I did not send a persisted query, but the error shows only whitelisted persisted queries are allowed. Since I collect Facebook's persisted GraphQL queries, I've decided to run a bunch of them to see if any are whitelisted. For example, the query "FBActorNameQuery":

Unfortunately, I could not find a single whitelisted one - the error was always the same. A couple hours later I remembered another way to send persisted queries, using doc_id as the query ID - these did not return the error, but in most cases they returned public data only. While this is a whitelist bypass, it mostly returned data which is already public. However, a query named "CSPlaygroundGraphQLFriendsQuery" leaked the friend list regardless of the privacy settings. Example request and response:

A bug existed in Facebook's Graph API that allowed querying for any user's payment cards details using a field named payment_modules_options. I found out about this field by intercepting all the requests made by Facebook's Android application during registration and login flow.
Here is an example request:

USER_ID is the id of victim's Facebook account, and TOKEN is the attacker's access_token from a first-party Facebook application, like their Android app. The query doesn’t work without a valid payment_type, but specifying an invalid one, payment_type(asd) returned the list of all possible payment types. This is a textbook example of an insecure direct object reference bug (IDOR).

Screenshot of the request and response using my account as the victim: 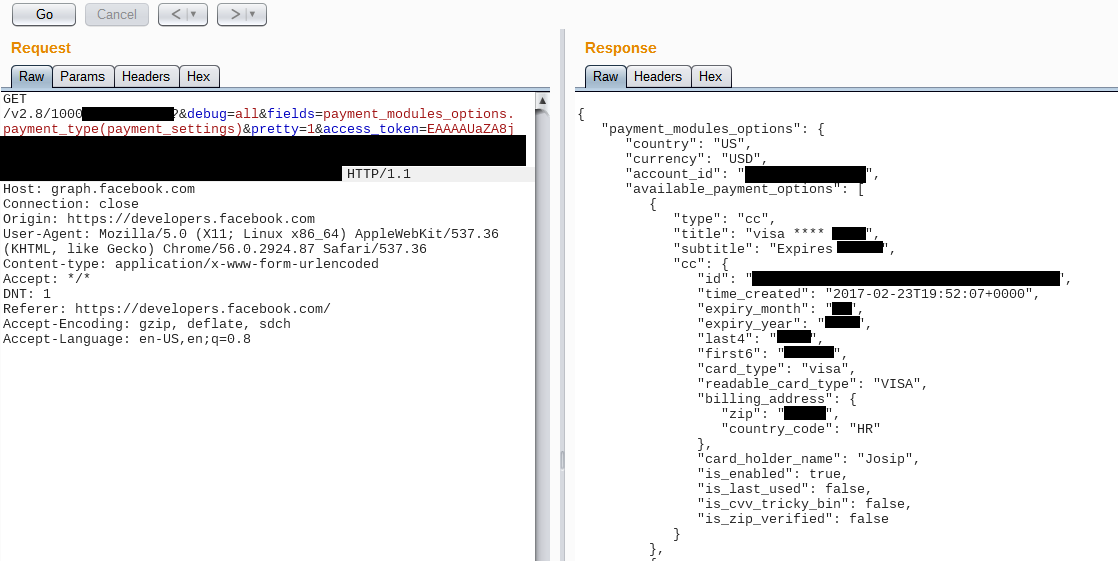 As you can see, the returned data included:

It took Facebook's team 4 hours and 13 minutes to fix the issue - the fastest report-to-fix for me. Thanks @phwd for proof-reading this blog post.

Race conditions on the web