The goal of this blog post is to raise awareness about race condition attacks in both developers and security people, because I feel like not many know about this kind of bug - I have participated in CTFs whose points system was vulnerable to race conditions (even Facebook’s CTF platform was). All examples I wrote about were found in public bug bounty programs and are fixed.

At the bottom of the page is a compilation of tools and posts for further reading. Enjoy!

Cobalt is a bug bounty platform that offers payouts in BitCoin and PayPal. Their BitCoin withdrawal flow was vulnerable to a race condition attack which could be used to withdraw one bounty multiple times. Check out the original report here:
https://cobalt.io/cobalt/cobalt/reports/587

This was an unusual race condition which could be exploited to confirm any unused email address on Facebook. During February, I was testing the mobile registration flow on Facebook, and somehow succeeded to confirm a random email address. I reported this to Facebook hoping they’d be able to debug it, since I did not understand how it happened, and made ~5000 requests before realizing the email was confirmed. On April 20th I re-tested the flow and finally got reliable proof of concept:

The GET parameter “c” is always the code for your email address, but the “code” parameter confirms the one you do not have acces to ([email protected]). After obtaining the code, you can go to Facebook settings and confirm the email.

During the final three months of 2014, Facebook announced they’d be giving double bounties for any ads-related bugs, so I started poking around and found a (minor) bug in how they handled ad coupons. Some coupons can be used only once, and a single ads account should be able to redeem only one ad coupon. Using race conditions, I could add multiple ad coupons to a single account. Bear in mind that this bug did not enable me to re-use single coupon multiple times or on different accounts.
To exploit this bug, you would need to buy a couple ad coupons, and try to redeem them at the same time on one account. Multiple coupons would then be available for you to spend, which obviously breaks the one coupon per account rule.

The interesting thing about this report is the timeline:

I was at fault here, because the steps were not clearly explained in my report. Looking back, I should have attached my POST requests and server responses for easier analysis.

At this point I gave up on the report because there was no way for me to prove the vulnerability, and Facebook had no luck reproducing it. But… 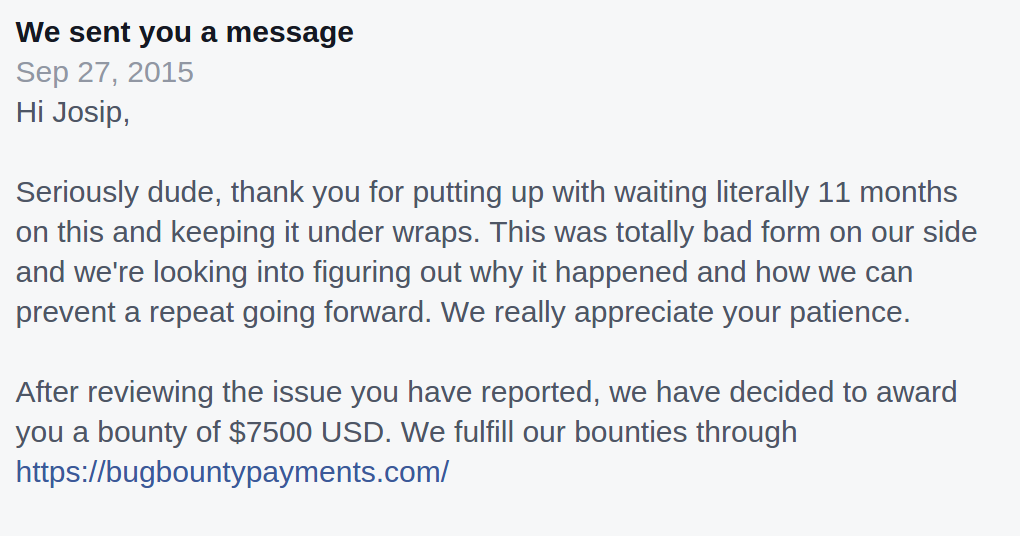 I think this bug is not worth $7500, so I asked Facebook for an explanation of the bounty. Their reply:

Mega was vulnerable to a coupons reuse race condition, very similar to one I found in DigitalOcean (writeup).

The other bug was present in the purchasing logic.
When you purchase Mega premium, a request is made to their API server eu.api.mega.co.nz/cs, which lowers balance and adds premium time. By sending multiple requests you could buy the premium multiple times, while your balance would go to negative values - this was not an intended functionality.
Mega rewarded me with a 250EUR bounty, which I told them to donate to LetsEncrypt.

First bug was present when generating invites for different emails. Let us assume you have 1 invite on your Keybase account. You could bypass the invitation limit by sending a bunch of POST requests with different email values to an API endpoint. Original report with the steps:
https://hackerone.com/reports/115007

Couple months later I saw Keybase re-designed the system, and tried the same attack. It did not work, but a new bug was introduced to the registration flow, using which you could register multiple users while redeeming one invite. Original report:
https://hackerone.com/reports/148609

Here are some links if you want to read more about race conditions:

A big thanks to all the companies listed for allowing me to write about those reports, and to you for reading!